This is my first time to post here. My modeling subject is a Philippine Air Force  P-51D

I have finished this subject long time back. This was the first build for me coming back to modeling aircraft after decades of absence .. This also served as test bed for the first HARIBON Decal sheet (The Shark of Zambales) . . The model wore the pre-production HARIBON Decal of the two types of markings the original aircraft carried thought out its service life..on the starboard ( seen on the header photo above) is the late markings while the port the early one...

The subject is a P-51D Mustang of the Philippine  Air Force nicknamed "The Shark of Zambales" . "The Shark.." was the personal aircraft of the 5th Fighter Wing Commander, Lt Col Benito N Ebuen (late 40s to early 50s). Ebuen rose to become the Philippine Air Force Chief and the Presidential Plane Pilot where in the latter concurrent capacity (but, not the pilot) he got killed in the crash of presidential C-47 plane nicknamed "Mt. Pinatubo" on a mountain named Mt Manunggal in Cebu in March 1957.. the Philippine President Ramon Magsaysay was also killed, with several staff, in that crash...

("Zambales" is the name of province from which Ebuen was hailed and it's located in the western part of central Island of Luzon (once the home of US Navy largest base outside US); "Pinatubo" is the name of very active volcano in Luzon (in Zambales Province) . . it had been dormant for centuries and, in World War 2, was the camp and headquarters of Guerrilla leader/fighter (against the Japanese) Ramon Magsaysay)

(since the taking of the photos the graphics had been refined to commercial quality) .

Actually, the shot is a comparative photographic image of decals printed by wet process (Ink-Jet) that in the background; and, dry-process that in the foreground..not much of a difference . . .I think . .

And, finally the "LIGHTER SIDE" of the Shark.. when I get to it in the up-coming days:

Well done!!
Haribon??? (Hope I wrote it correctly???)
I didn't know this brand of decals.
Is it from Philippines? Or elsewhere?
Anyway, do they have a webpage, or something where we can check their line of products?
tausugair

Many thanks to @ntoine and numax78 for the appreciation. . . your comments are inspiring and encouraging...

@ntoine, HARIBON-Decals is Philippine made decals (both in 72nd and 48th scales), HARIBON is specializing on Philippine Air Force aircraft decal subjects . . . These have been on the local (Manila, Philippines) market since 2011 and available thru JMN Hobby Park Square, Harrison Plaza, Manila, Philippines...(below is a file photoshot of the decal sets line ) 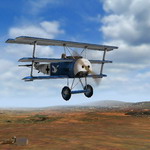 Just great!
I got to get all of them!
I do not have the opportunity to go to Manilla, so I'll try to contact the shop.
Many thanks!
Do not hesitate to tell us about any other aftermarket stuff coming from your islands.
piovre